Today is the 29th Anniversary of Hurricane Gilbert

Do you remember hurricane Sandy? We in Jamaica got away with that one, now didn’t we? That was not the case with Hurricane Gilbert on September 12, 1988 and Hurricane Ivan on September 11 - 12, 2004.

Today is the 29th anniversary of Hurricane Gilbert

The link below shows the mild winds we experienced in Kingston on September 12, 2012 while I was staying with my husband at Terra Nova just before leaving the country on the following morning. We made the flight. That certainly wouldn’t have happened after Hurricane Gilbert or Hurricane Ivan.

There were hardly any trees left in the Montego Bay area

Today is the 29th anniversary of Hurricane Gilbert, so I thought I’d reminisce just a bit about that fateful day when Gilbert came to visit and wreck our beautiful island home. Thankfully Hurricane Irma chose to give us a miss this year.

For Hurricane Gilbert, I was living at home. However, my mother was ill in the hospital and so, I was all alone for the most part until a day before the hurricane. I had been so clueless that it wasn’t until my mother turned up that I had even known that a hurricane was about to hit the island. In fact, it was one of the reasons that she had been sent home from the hospital. Plus there had been nothing more that they could do have done for her. The rest of my family had been overseas and they missed the entire thing.

On retrospect, my mother hadn't known what preparations to make herself, having never experienced a major hurricane before. The last high intensity hurricane (i.e., Hurricane Charlie) had hit Jamaica back in 1951, a couple of years or more after she’d been born.

At the time, my mother had been a paraplegic, unable to move from the neck down. So, with one day’s notice we did the best that we could. Mommy would give me instructions on what to get battened down, what to clear from the yard (e.g., drains and such the like), what to do with all the “loose” items so they’d be out of the way (e.g., burn them or stuff them somewhere in our already filled-to-capacity storeroom), and what containers to fill (i.e., the bath, the washing machine, plus every basin and pail that we had in the kitchen and washroom).

We didn’t have any money available to buy any boards to batten down our windows, so we used masking tape we had lying around the house to make Xs on all our windows. For us it was a really time consuming task since 90% of all our windows were made of glass.

We didn’t have a generator

I remember going shopping but I can’t recall what I bought but I’d imagine some corn beef, tinned mackerel and sardines, crackers, rice, spaghetti, flour, cornmeal, eggs, cans of vegetables. Only foodstuff that could last for a while without refrigeration. We didn’t have a generator. I would imagine few Jamaicans did have one in their homes in those days. I don’t recall being able to get bread, candles and batteries. By the time I made it to the supermarket, it seemed that all of Montego Bay had already cleaned out the place. But there was one thing I and my mother were good at, we knew how to make do. For example, with only flour, eggs and water, we could always make dumplings and pancakes. If we switched out the eggs for some saltfish or meat, then we’d have fritters to eat. We could even make cornmeal bread with what we had.

I’d like to boast that I did this all by myself but the truth is I had help. We had a “gardener” of sorts who lived with us, in a separate building. He worked for us in exchange for somewhere where to live and whatever we could pay him from time to time. After my mother lost her mobility, it turned out to be a great arrangement for my family, since money was scare in our house. Today, I remember him mostly for all the chicken foot soup he used to make for us. Delicious! He spoiled me with that dish. I still can’t do it justice no matter how hard I try. Then again, I'll own up to the fact that I'm not a fantastic cook.

However, back to Gilbert. Our evacuation plan had been really simple. We agreed that we would go to the downstairs section of our split-level house if something happened to the upper section. It was the safest area with wooden windows instead of glass, but only used for storage at the time, which is why we opted to stay in comfort where we had beds to sleep and little or no dust to contend with. As a result, we’d been prepared to stay at home no matter what, and because we lived on a slope, our experience over the years had proven that the probability of flooding would be extremely low.

When the hurricane hit, my mother and I were truly alone. We went to one of our bedrooms that was located in the centre of the house, with no windows to the outside, to reduce the risk of us getting hurt or needing to move during the hurricane. Remember, our windows were mostly glass. We’d predicted that they’d not last long.

I was able to see everything through the glass windows as I skirted from room to room to view what damage was being done outside and reporting back to my mother, who had been forced to stay in bed. You see, because she’d just gotten home from the hospital without any advanced notice, we’d not been prepared for her move home. There hadn’t even been a wheelchair to move her around in. Needless to say, we’d been hoping fervently that all the hype would sizzle out to nothing.

Our first biggest worry came when we heard footsteps outside our house in the night, scaring us both

For the most part, there wasn’t much damage that first day despite the howling winds and rain teeming down. The yard was covered with fruit, branches, leaves, and our phone and power lines, but apart from that there was nothing extraordinary. I remember nuff coconut, avocadoes and mangoes and thinking what a waste. And that night, it was so peaceful as the eye passed over. I’d honestly believed that we’d worried for nothing.

Our first biggest worry came when we heard footsteps outside our house in the night, scaring us both. We still don’t know what it was, a dog going about its business or someone looking for something to loot. It was so pitch dark that I could barely see anything, even inside the house where we’d taken the precaution to keep all candles and lamps out to conserve as much as we could since we’d no inkling when we’d finally have electricity returned to the house. We hadn’t even turned on the radio, so that we wouldn’t waste any batteries…not that the radio stations were broadcasting.

The second day was something else. It seemed that the wind had decided to change its strategy of attack. Trees were swirling opposite to the direction they’d been going on the previous day, and this time around many gave up the ghost. One by one the trees in our backyard started to fall to the ground, some narrowly missing the buildings in the yard as the hurricane tore them out by their roots or pulled them to the ground. We lost a lot of trees, breadfruit, banana, coconut, ackee, naseberry, you name it. One of our avocado trees went into shock and took about ten years to bear fruit again. I don’t know how they managed but a few survived, a few remained fully upright but some were left almost parallel to the ground held in place with some of their roots stuck stubbornly into the ground.

I also remember thinking that the house was going to be blown away, so ferocious were the winds outside. My mother also grew concerned and she sent me to open a few windows on one side of the house, opposite to the direction that the trees outside were swirling. The theory was that it would ensure that the air pressure inside matches the dropping air pressure outside thereby reducing the probability of the roof blowing off. Of course, we all know now that the experts say that this practice is unnecessary since no house is built airtight and therefore the pressure differences between the house and the outside during a storm will not build up enough to tear off the roof.

Roads were blocked in all directions

When it was all over, we were pleasantly surprised that we’d gotten with little or no significant damage to the house. The zinc covering a small section of our roof had flown off at some stage. Luckily, that was over the verandah and so the damage was minimal. Pretty much all of our windows also stayed intact, and for those that didn’t, the masking tape seemed to have prevented tons of splinters from falling to the ground.

Of course, we wondered then what had happened to our neighbours and the rest of the country, but with all communication down, my mother encouraged me to go for a short walk. I was amazed to find out what had happened. Roads were blocked in all directions. We had neighbours whose homes had been completely destroyed. Some houses had no roofs left. There were hardly any trees left in the Montego Bay area. My mother and I, thankfully, had been spared.

I learned from that experience, as I believe did many of us who experienced Hurricane Gilbert or were devastated by Hurricane Ivan, another hurricane, or even the recent floods that hit Jamaica in May of this year.

I have learnt to always be prepared. Read our article on how to prepare for a hurricane to find 14 tips you can use as a guide. We hope you find it useful, and hopefully you won't need it this year, if all the hurricanes popping up in the region avoid Jamaica (like Irma, Katia, Jose) or wherever else in the world you are.

I don't have any pictures from Hurricane Gilbert. Didn't even think about taking any. Instead, I've extracted a few from the book "Hurricane Gilbert" by Bob Hill and Bob Ogley with Joan Hooley, published by Froglets Publications and produced by Pen & Ink Publicity Services, both in in Kent, UK.

This article is for general information purposes only and does not constitute legal advice. For more property-related articles and news, check us out at Nohuts.com. 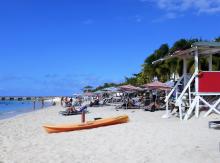 The Best Places To Live In Montego Bay In St James 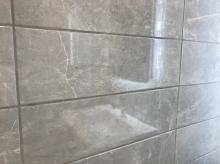 11 Bathroom Problems to Assess Before Buying a House 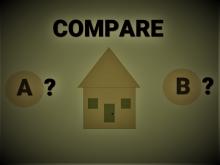 Comparison of Mortgage Rates in Jamaica for Purchasing a Home 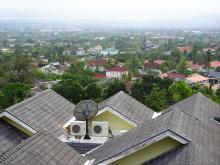 The Best Places To Live In Kingston and St Andrew